The State Government is delivering on its important election commitment to upgrade the 3.4-kilometre section of Golden Grove Road between One Tree Hill Road and Park Lake Drive.

The project is being delivered in two stages, with construction currently underway on the section of Golden Grove Road between One Tree Hill Road and Kunzea Way, just north of the signalised Golden Grove Road/The Grove Way/Yatala Vale Road intersection.

Other improvements being delivered as part of the Stage One works include sheltered right turn lanes at most unsignalised junctions, indented bus bays, on-road bike lanes in each direction, improved pedestrian facilities including new footpath and pedestrian crossing facilities,  kerb and gutter and drainage, targeted road resurfacing, as well as new and upgraded road lighting.

This $20 million upgrade of Golden Grove Road will help ease traffic congestion as well as improve safety for all road users. The upgrade forms part of the Department for Infrastructure and Transport's commitment to continually develop and upgrade the key arterial road network.

The Stage One works are being delivered by local South Australian company Civil & Allied Technical Construction Pty Ltd and are expected to be completed later this year, weather permitting.

For more information on the project visit https://www.dit.sa.gov.au/infrastructure/road_projects/golden_grove_road_upgrade

Make a healthy difference all round!

One of the traffic controllers on our Golden Grove Road Upgrade Project has been making a big impression on fellow workers and members of the public.

Matthew Berkholst, from RAW Recruitment and Services, received a Safety Award for his outstanding contribution to Health & Safety based on positive feedback recognising his attention to health and safety, a positive attitude, diligence to the job, friendliness to motorists and pedestrians, and outstanding service.

Members of the public even took the time to contact RAW to provide thanks for the great work he is doing. Great job Matthew! 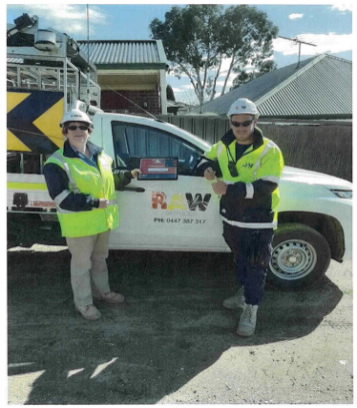 While the removal of vegetation and trees is an unfortunate consequence of major infrastructure projects such as this, all efforts are made to reduce impacts and put the removed vegetation to good use.

Pleasingly, the project team has been able to assist the rescued koalas and their joeys at the Adelaide Koala Rescue by providing branches and gum leaves from trees removed as part of this project, to the rescue centre.

The branches will be re-used in an exercise and rehabilitation program for rescued animals affected by the recent bushfires, by helping them to climb and rebuild strength in readiness for relocation back into the wild, while the gum leaves contribute to the feeding program.

With the removal of vegetation and trees, all efforts are made to reduce impacts and put the removed vegetation to good use.

‘Wood for Good’ (W4G) has been engaged by the project team to take 60% of wood from trees removed as part of this project. W4G is a social enterprise company aimed at providing opportunity for Indigenous employment through the processing of firewood with all profits from sales donated towards Tier 1 charities such as St Vincent DePaul, Bright Futures, Adelaide Botanic Gardens and Motor Neurone Disease Research.

Additionally, W4G will donate to charities directly involved in the 2019-2020 bushfire recovery effort.

As part of their commitment to salvaging as much wood from the Golden Grove Road Upgrade Project as possible, W4G have been able to provide the following: Wood given to ‘Wood 4 Good’ with sales donated to charity; logs sent to local schools; foliage supplied to Adelaide Koala Rescue; and logs and mulch provided to the local quarry and Tea Tree Gully Council