A maximum 60km/h speed limit applies to all trucks and buses from the Crafers interchange to the bottom of the freeway. The speed limit for all other vehicles is 90km/h and drivers should remember to always drive according to the prevailing road conditions.

All road users are reminded and particularly heavy vehicle drivers that the last 7kms of the South Eastern Freeway comprises a very long and steep descent that, although the gradient becomes less severe near the bottom of the Freeway, it does continue downhill through a signalised intersection and into an urban area.

How to descend the South Eastern Freeway safely

On 1 May 2019, changes to legislation introduced new penalties for drivers of all trucks and buses detected driving unsafely on the down-track of the South Eastern Freeway into Adelaide.

When descending the South Eastern Freeway, truck and bus drivers must:

Note: The intent of the low gear offence is not to completely prohibit the use of the primary brake, if considered necessary in the circumstances however, the law requires the driver to use a gear that is low enough to enable the vehicle to be driven safely without relying on the primary brake as the sole means to slow the speed of the vehicle on the descent.

Note: Trucks and buses are limited to a maximum speed of 60km/h on the South Eastern Freeway down-track, however speeds may be further reduced via the variable speed limit signs or other temporary speed limit signs at any time as required to maintain safe travel. This may include inclement weather, reduced visibility or as a result of a crash, roadworks etc.

From 12.01am on 6 December 2019, truck or bus drivers whose vehicles are not engaged in a low gear, as described above, or exceed the relevant speed limit by 10km/h or more will receive:

*Note: Where the accrual of demerit points brings the total number of points on a person’s licence to 12 or higher, a demerit point disqualification will be applied by the Registrar of Motor Vehicles, as per existing provisions.

The revised penalties passed by the South Australian Parliament, better reflect community expectations, particularly around first offences, while maintaining strong penalties for repeat offenders who have chosen to disregard the law, putting themselves and others at greater risk.

The penalties that came into force on 1 May 2019 for truck or bus drivers whose vehicles are not engaged in a low gear, as described above, or exceed the relevant speed limit by 10km/h are as follows:

Note: A SE Freeway offence committed before 6 December 2019, will continue to count when determining penalties for any future offences.

Where a person expiates either one of the above offences, the Registrar of Motor Vehicles (the Registrar) must issue a Notice of Disqualification for the relevant period. There is no discretion in the legislation and no leniency can be applied by the Registrar, even where a truck or bus driver requires their licence for work.

These new penalties only apply to the portion of the down-track of the South Eastern Freeway as indicated on the map below, ending at the intersection of Portrush, Cross and Glen Osmond Roads.

Existing speeding penalties continue to apply to trucks and buses that exceed the relevant speed limit by less than 10km/h on this stretch of road after 1 May 2019.

Please note; in the event of an emergency,  exemptions apply to emergency vehicles in relation to the offences of using low gear and exceeding the relevant speed limit on the SE Freeway descent.

Emergency vehicles are expected to use flashing red or blue lights or sirens and take reasonable care when driving in an emergency. 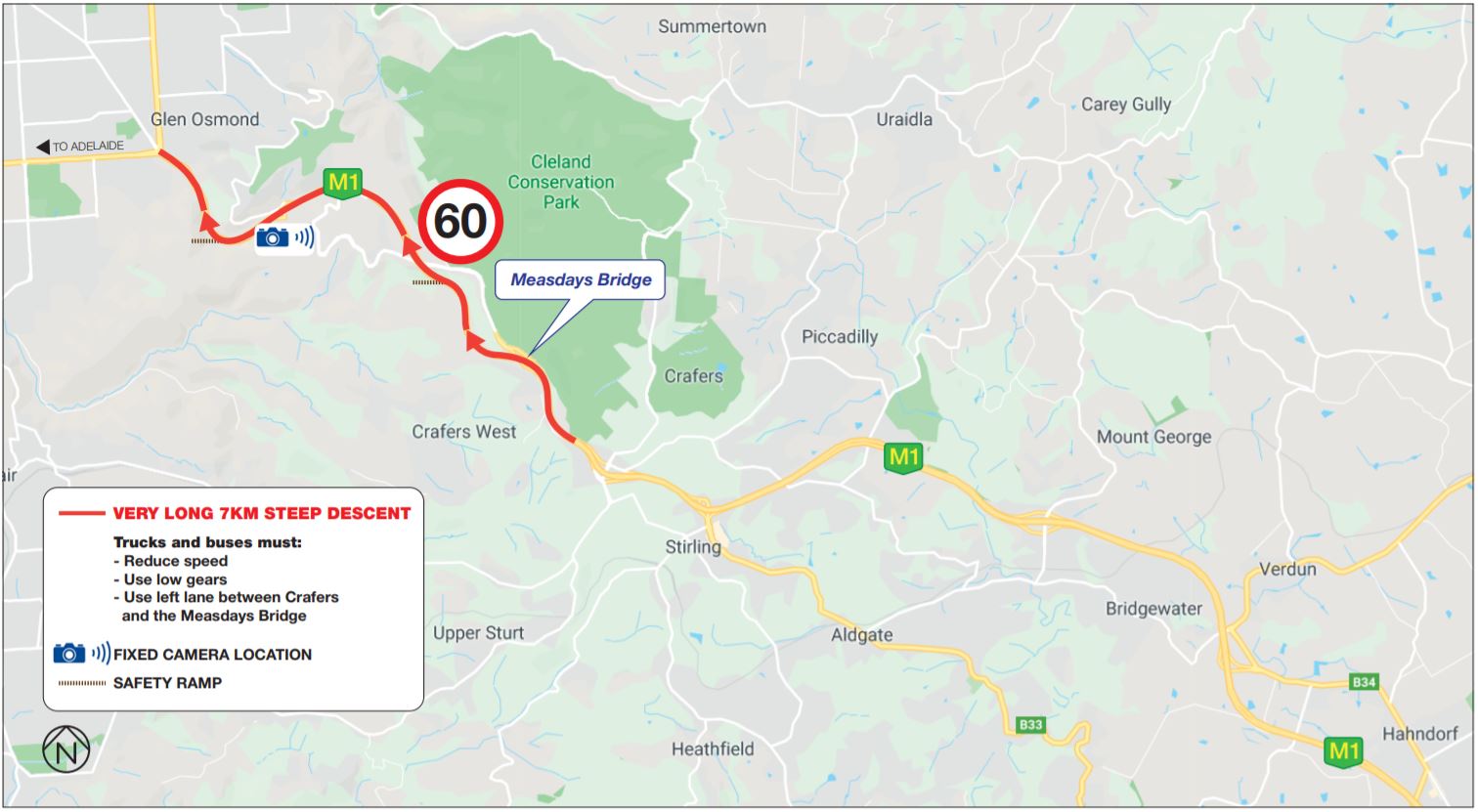 Definition of a Truck or Bus

A Truck is a motor vehicle with a Gross Vehicles Mass (GVM) of more than 4.5 tonnes, regardless of the body type of the vehicle (excluding tractors, trams and buses).
The GVM is not the Tare Mass. It is the GVM recorded and relied on for registration purposes. Refer to your registration papers for the GVM of your vehicle, check via the EzyReg app or call Service SA on 13 10 84.

A Bus is a motor vehicle that seats more than 12 adults including the driver.

The definition of a bus is based on the number of seats, regardless of the Gross Vehicle Mass (GVM) or whether the seats are occupied or vacant.

Small buses with 1-12 seats are not subject to the speed and low gear restriction on the South Eastern Freeway.

Vehicles affected by the new laws

While some vehicles are clearly a truck such as semi-trailers and B-double freight trucks, there are a number of smaller vehicles that may also be classed as a truck or bus.

Examples of vehicles that may be subject to the new laws based on GVM or seating capacity include:

Note: The legislation is very specific about the laws only applying to vehicles classed as a truck or bus. They do not apply where the Gross Combination Mass (GCM) of a vehicle towing another vehicle such as a trailer, horse float or caravan may exceeds 4.5 tonnes in total.  While such vehicle combinations are not captured by the new laws, it is important to remember that drivers should always drive according to the prevailing road conditions to ensure they can descend the SE Freeway safely.

Is your vehicle classed as a truck or bus?

If you are unsure if a vehicle is classed as a truck or bus for the purposes of the new penalties:

Fixed signs will be installed in the lead up to the down-track to remind drivers to descend safely and avoid heavy penalties.

These advisory signs, as well as speed limit and low gear signs that refer to “Trucks & Buses” apply to drivers of all vehicles mentioned above.

For a safe descent - use the right gear.

From 1 May 2019 a new offence modelled on existing Australian Road Rule (ARR) 108 applies to the last 7 kilometre descent of the South Eastern Freeway; however the intent remains the same. All city-bound trucks and buses must slow down and engage the appropriate low gear to descend safely.

Trucks and buses may overtake on the descent, as long as they remain in low gear and do not exceed 60km/h. However they are required to stay in the left lane between Crafers and the Measdays bridge exit ramp and therefore cannot overtake between these points. Increased penalties apply from 1 May 2019 for failing to use low gear on the down-track of the South Eastern Freeway.

ARR 108 (and associated penalties) will continue to apply on all other descents across South Australia where “Trucks and Buses must use low gear” sign applies.

There are two fully signed safety ramps on the left side of the South Eastern Freeway between Crafers and Adelaide.  The first is located prior to the entrance to the Heysen Tunnels and the second is three kilometres further down just past the Mt Osmond Interchange.

The main stopping force in a safety ramp is the drag caused as the vehicle sinks gently into a bed of gravel.  The effect on the driver is actually less than emergency braking, so the stopping force of the gravel should not result in injury to the driver and it is unlikely to cause damage to the vehicle.

'Don't risk it.  Use the safety ramp' 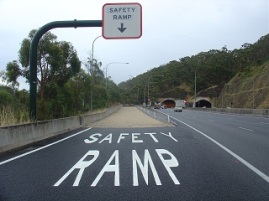 The safety ramp signs for the second safety ramp display LAST CHANCE on the 300m, 200m and 100m signs to indicate the last opportunity to use a safety ramp.

Finally, a sign clearly indicates the entrance to the safety ramp.

'The Department for Infrastructure and Transport does not charge heavy vehicle users of the safety ramps.'

Drivers of heavy vehicles who experience brake failure or related mechanical issues must enter a safety ramp at the earliest opportunity.

The removal of a vehicle from a safety ramp requires the use of tow trucks.  DIT must be contacted by using the emergency phone at the safety ramp or by phoning Traffic Management Centre 1800 018 313 direct.

'But remember, use of the right gear avoids the need to use a safety ramp'

The Department of Infrastructure and Transport operates a number of checking stations to allow a safe off road area for the inspection of heavy vehicles which may be operating illegally or in an unsafe manner.  These sites can also be accessed by other agencies such as SA Police, SafeWork SA, Customs and PIRSA.

The Monteith Checking Station consists of two stations, situated on either side of the Princess Highway road between Tailem Bend and Murray Bridge and is used to check vehicles travelling into and out of Adelaide.

The Monteith site is used to check all aspects of Heavy Vehicles and their safe operation, such as; 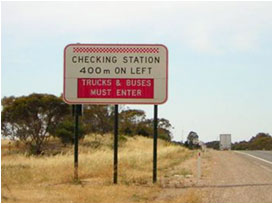 The Monteith weighbridge has a five plate weighbridge capable of weighing large combinations such as B Double trucks in a single weigh.

All buses and heavy vehicles with a Gross Vehicle Mass (GVM) greater than 4.5 tonnes must enter the sites when the variable signs indicate all that all trucks and buses must enter.  Failing to enter the Checking station when directed and/or disobeying a 'Trucks must enter' sign may result in a fine.

The height clearance for the Heysen Tunnels is 5.3 metres (this is also the clearance height for the Mt Osmond and Crafers interchanges).

Over-height warning signs are located before both approaches to the Heysen Tunnels and work in conjunction with laser beam vehicle height detectors to detect vehicles that are too high to safely transit the tunnels.

When the height detector identifies such as a vehicle, the over-height sign flashes to direct the driver to stop in the stopping lane provided to the left of the road.

The over-height detector also automatically sends an alarm to DIT.  Upon confirming the presence of a stopped vehicle via cameras, DIT will request police or emergency service attendance at the site to assist the driver to turn the vehicle around.  Turning around at the entrance to the tunnels has been provided for by a break in the median strip.

Drivers may also contact DIT by using the emergency phones located nearby or use their own phone to call the emergency contact number 1800 018 313.