You are here:
Home
DIT
About Us
Governance and Reporting
Annual Reports
DIT Annual Report 2021-22 online version
Overview: About the Agency
Section menu

Overview: About the Agency

As at the period ending 30 June 2022, the Department for Infrastructure and Transport (the Department) has diverse responsibilities for transport systems and services and infrastructure planning and provision within South Australia.

The Department ensures that South Australia’s needs for the movement of people and freight, and the delivery of services across the transport and infrastructure sectors are met in a safe, efficient, cost effective and sustainable manner.

Reports directly to the Chief Executive are Executive Directors for: 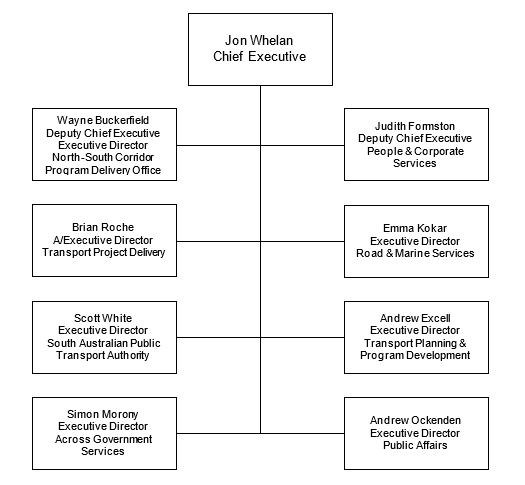 Changes to the agency

During 2021-2022 financial year there were no changes to the agency’s structure and objectives as a result of internal reviews or machinery of government changes.

Jon Whelan is Chief Executive of the Department, the South Australian Rail Commissioner and Commissioner for Highways. Jon is accountable for the delivery of the Government’s requirements for the Department, setting strategy and policy, overseeing implementation of programs, projects, initiatives, and service delivery, and driving improved performance.

Judith Formston is the Deputy Chief Executive of the Department and Head of People and Corporate Services. Judith enables the Department and its people to fully comply with our obligations, do our work and deliver on our commitments by directing and managing the enterprise’s human resources, finances, and core business processes and systems (including information technology, statutory and legal, procurement, risk, and assurance).

Wayne Buckerfield is the Deputy Chief Executive of the Department and Executive Director, North-South Corridor Program Delivery Office. Wayne leads and directs the program of work to enable the delivery of the final stage of the North-South Corridor. Wayne is the Senior Responsible Officer accountable for finalisation of the business case, detailed project design, all supporting pre-construction works, and delivery of the program to its final approved design, budget, and schedule.

Brian Roche is the Acting Executive Director, Transport Project Delivery. Brian leads and directs the delivery of a portfolio of capital investment programs for road, rail, marine and other transport infrastructure upgrades and new builds, and is the Senior Responsible Officer accountable for delivering these projects as specified, on time and within budget, identifying and implementing mitigation measures to manage any associated risks.

Emma Kokar is the Executive Director, Road and Marine Services. Emma ensures the safe, reliable and efficient movement and flow of goods, services and people across the State’s Roads and Marine networks by leading and directing the team that delivers all aspects of their maintenance, operation and regulation, and managing key partner relationships that play a role in these outcomes.

Scott White is the Executive Director, South Australian Public Transport Authority (SAPTA). Scott is responsible for the delivery of effective and efficient public transport services and exceptional customer service provision in mass public transit. SAPTA provides a customer-first public transport system that is affordable, safe and secure, frequent along the key corridors, clean and comfortable, easy to understand and use and friendly and inclusive.

Simon Morony is the Executive Director, Across Government Services. Simon is responsible for leading and directing the team that delivers building infrastructure programs, minor building project works, facilities management services, property leasing, other property related services and land acquisitions on behalf of State Government clients from health, education, justice, cultural and other departments, as well as for the Department.

Legislation administered by the agency

Minister for Infrastructure and Transport

Proof of Sunrise and Sunset Act 1923

Protection of Marine Waters (Prevention of Pollution from Ships) Act 1987