This project has focused on delivering economic benefits to the local South Australian community including creating 480 full-time equivalent jobs each year during construction.

The Northern Connector opened to traffic from Saturday, 7 March.

The six lane motorway posted speed limit has now been increased between the Southern and Northern interchanges from the temporary 80km/h limit to the motorway’s permanent maximum speed of 110 km/h.

Finishing works will continue which may require some lane and speed restrictions, to ensure the safety of motorists and workers. Please keep an eye on our Facebook page and this website for further project updates.

On behalf of the project we would like to thank you for your patience and for your interest in the project.

For more information about the opening, and to view videos showing how the interchanges work (click here)

The final sections of the TAPA MARTINTHI YALA Shared Use Path, which runs alongside the Northern Connector motorway, opened on Saturday 1 August 2020, at the Southern Interchange and Dry Creek Trail.

The opening of these final sections completes the Shared Use Path, which creates approximately 43km of continuous paths from Gawler to Port Adelaide.

Asphalt works will be undertaken on the Northern Connector (both directions) between the Southern and Bolivar Interchanges at the following times, weather permitting (click here to view a map):

The Salisbury Highway off-ramp to South Road beneath the Superway will be closed for guardrail works at the following times with a detour in place, weather permitting (click here to view a map):

Signage and traffic management will be in place to advise of changed conditions.

As previously advised, speed and lane restrictions remain in place on the Port River Expressway, Salisbury Highway and the Northern Connector in the vicinity of the Southern Interchange for finishing works.

Thank you for your patience while these important works are being undertaken.

Finishing works will be undertaken on the Port River Expressway, Salisbury Highway and the Northern Connector from Monday, 6 July until Friday, 17 July , weather permitting.

Works will rotate between the Port River Expressway and Salisbury Highway in the vicinity of the Southern Interchange and the Northern Connector on and off ramps during the works program.

Speed and lane restrictions will apply in the vicinity of the works.
Signage and traffic management will be in place to advise motorists of changed conditions.
Every effort will be made to minimise impacts to motorists. Click here for more details and a map. 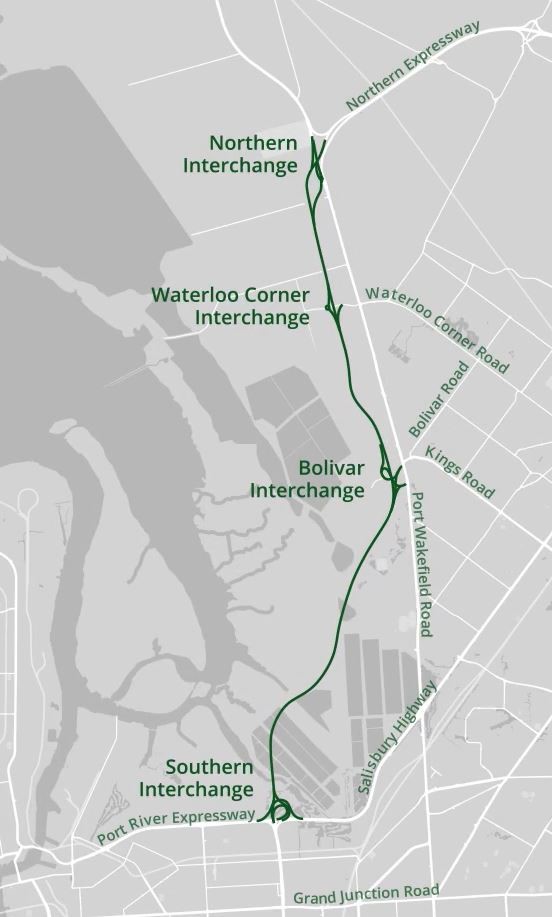 The second section of the Tapa Martinthi Yala Shared Use Path (SUP) which runs alongside the Northern Connector motorway, between the Bolivar and Southern Interchanges, opened on Sunday, 17 May, connecting and also opening the new Port River Bikeway.

The first section of the new shared use path which runs alongside the Northern Connector motorway, opened on Saturday 18 April, between the Northern and Bolivar Interchanges.

The name of the path is Tapa Martinthi Yala, meaning "pathway to embrace today" in the Aboriginal Kaurna language.

From 8pm Sunday 16 February the Northern Expressway on-ramp from Port Wakefield Road (Northbound) will be closed.

Access to the Northern Expressway is now from the Northern Connector via either the Southern, Bolivar or Waterloo Corner Interchanges or from Heaslip Road.

Approximately 5,000 people came along to our Community Open Day on Sunday 16 February which was held at the main site compound, NorthHub.

A highlight of the day was the availability of free guided bus tours which drove along the new motorway to the Southern Interchange and back, with around 1,400 people enjoying these tours. People were also able to walk on a short section of the new road and drove on it to exit the site.

The Department will continue to tailor community engagement opportunities in line with the latest COVID-19 advice from health authorities.

Face-to-face engagement opportunities may be restricted and we will continue to be guided by the advice of health authorities, with the health and safety of our stakeholders always our highest priority.

Engagement with community and industry is crucial and we will facilitate information sessions as much as possible to enable face to face engagement. It is important to assist in managing these events that you register as requested to enable physical distancing as much as possible.